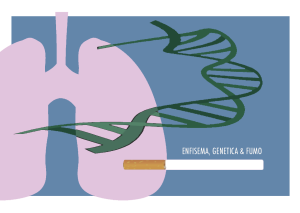 There are people with a higher risk of developing respiratory diseases, among which the most important and common is the emphysema. These can result of respiratory infections and inhalation of irritating substances, especially cigarette smoking. The underlying genetic defect of the increased susceptibility is the alpha1-antitrypsin deficiency, one of the most common hereditary diseases although under-diagnosed because not well known.

Is there a protective gene that defends the lungs? Is it possible to know if you have an increased risk of developing respiratory diseases, or if our own children have it before symptom appearance? This knowledge could induce virtuous behaviors such as cessation of cigarette smoke or the switch to electronic cigarettes which may be a less dangerous alternative.

The answer is YES, and it’s easy! Since some years we have developed a method for diagnosing Alfa1-antitrypsin deficiency, which is based on a kit consisting of a special filter paper, on which six drops of blood are placed. Everything can be sent as a postcard to the “Center for Diagnose and Coordination of the Inherited Alpha-1-Antitrypsin Deficiency Registry”, at the San Matteo Hospital that is the reference center for Italy. The blood drops are sufficient to perform all the biochemical and genetic tests needed for a complete and accurate diagnosis of Alfa1-antitrypsin deficiency.

Our research team is not just concerned about diagnosing but also about identifying new genetic variants which are associated with respiratory (but also hepatic) diseases. These rare variants help us in understanding which regions of the gene regulate the conformational state of Alpha-1-antitrypsin protein. In the framework of the initiative launched by the European Commission and called “European Reference Networks” (ERN) for complex or rare diseases that require highly specialized treatment and concentrated knowledge and resources, we have been identified as the reference laboratory for Western Europe.

We currently carry out more than a thousand of testing per year, thanks to state-of-the-art tools and dedication of our staff that is precarious. However, we have the ambition and certainty that we can do more. First, it is necessary to increase the awareness about the existence of this inherited risk factor and intensify the efforts against cigarette smoking. In addition, a continuous technological upgrade is necessary and it is crucial to offer future certainty and prospects to those who work on this project.

20.000€ for support an accademic position as researcher

The donor will have his name/logo on website www.alfa1antitripsina.it and on social networks

Alpha pin, “Breath for life” t-shirt and acknowledgement in a paper published in an International Journal.